We continue to walk 2-3 days per week, and have increasingly focused on downtown Portland.  At this point, there are six of us who go out every week, and 4-5 others who join when they can.  We typically post one or two stories on Facebook every week, so join us there if you can.  I've compiled some recent stories below... 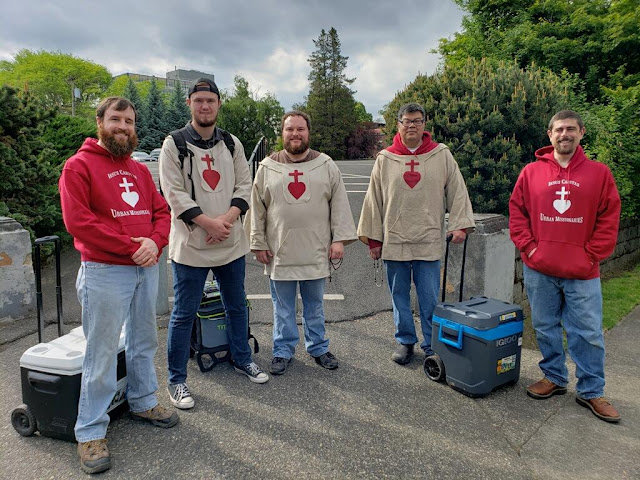 We try to bring grace to ugly situations. Earlier today things got ugly at the Corpus Christi procession in the downtown Park Blocks. The procession stopped at the Blocks to adore the Blessed Sacrament and pray a communal rosary. But one regular denizen of the Park Blocks, Michael started screaming all manner of things against the Catholic Church, and then another Parks Block resident, Stuart, (seated next to me in the photo) began yelling back at Michael. Michael was ushered away by a young Catholic man, and then Michael spilled his story to us.
It turns out that Michael and his brother were molested as teens by at least one Franciscan priest. They came from a broken home, were referred for counseling at Dammasch State Hospital, and then were preyed on by Franciscans who were affiliated with the hospital. Michael is Italian, was raised Catholic, and I found him completely credible. I emphatically thanked him for telling his story, and shared my love and care. It's extremely important that the Church listen with love to men like Michael. I'm sure some people thought he was an angry, homeless crank, but he's not homeless and he's not a crank. I've seen him before at the Park Blocks--a retired single man with his little dog--and I always wondered why he was so frosty to us. The Park Blocks are his place of peace, and when the procession wound through he completely lost it. There was grace there for everyone, and we left on good terms. He apologized and said he knows there are many good priests. I pray he continues to drain that wound and accept healing.
I made fast friends with Stuart, an older alcoholic man who tried to scream down Michael. Stuart had a remarkable grasp of the Scriptures, and told me, "I was raised the right way." He acknowledged that screaming at Michael was wrong, and then he launched into some lengthy soul searching. He is frustrated and somewhat baffled that he loses his fight with the bottle nearly every day. He quoted the famous verse from St. Paul (Romans 7:15): "I do not understand my own actions. For I do not do what I want, but I do the very thing that I hate." I commiserated with him, and we talked about God's mysterious plan of salvation. I shared the story of Venerable Matt Talbot, and how fighting the bottle was Matt's path to salvation. Stuart was delighted when I gave him a rosary, and he was eager to learn how to pray it. He quickly grasped that the rosary is a meditative prayer that centers on the Gospels. We had a final laugh when I sneakily placed a couple of cigarettes next to him on the bench. Eventually he noticed them and proclaimed, "Its a miracle! Miracles do happen!"

Getting off the Streets

More of our old friends from NE 82nd are getting off of the streets. Earlier in the week I told Jeff's story, and now Tom and Angela are off heroin and in permanent housing. Tom and Angela are a couple who first met on the streets several years ago.
The first time I met them, I was befuddled as to what they were doing out there. They seemed to have it together, and had a maturity and social skills that can be rare on the streets. Then I saw a larger part of the picture the second time I met them at a homeless camp along Interstate-84. I had boxes of goodies, including deli meats, cinnamon rolls and cheesecake slices. I tried to distribute things fairly, and the homeless are usually good at sharing. Unfortunately Lexi was a bit too pushy about wanting some of Angela's cinnamon rolls, and Angela lashed out. A brief skirmish ensued, and I was impressed with Tom's cool in physically breaking up the fight and pushing for reconciliation.
It turns out that Angela has been on the streets on and off for fifteen years, since she ran away from home as a teenager. She learned to be a fighter in that time, though she's also a sweet woman. She sincerely apologized to me the week following the scuffle. Her moral compass works, and she cares about other people and herself.
Tom grew up in a home with a loving mother and a step-father who treated him like his own son. Tom's biological father was a career criminal, and was eventually given a life sentence. Tom went off the rails when young, and landed in the same prison as his father, though he didn't know it. When Tom ended up in the Oregon State Penitentiary infirmary, his biological father reached out to him for the first time. It was an important moment of healing for Tom. His recent struggle with homelessness is the first and only time he's lived on the streets.
Nowadays Tom is clean and Angela is on methadone. They have jobs and are recently married. They even bought fancy wedding rings, with the help of a loan. They've each ministered in the past at protestant churches, and Angela suggested they should become Catholic. It was a moment of enthusiasm, and maybe they will. I took it as a sign that they appreciate us and what we do.
Thank you to Jacob for walking with me that day. We felt called to take a new, unusual route by the Willamette River, and the Holy Spirit came though by reuniting us with Tom and Angela. Glory be to God!

Yesterday we heard some good news from Jeff, a high-functioning homeless man that we've known for several years.
The first time we met Jeff he told us that he had been attending the First Saturday masses at The Grotto. Jeff was raised Catholic, and he always struck us as a simple guy with a good heart. God gave him a strong frame and he usually worked as a day laborer. I remember one time witnessing his raw hands from tossing old concrete. I always thought that Jeff was an ideal candidate to get off the streets, and now he has. He's got a job and an apartment out in Beaverton. Yesterday he was out in NE visiting old friends. He was happy to see us, and declined any of our usual goods. He doesn't need them anymore, and Jeff was never the type to take what he didn't need.
One of Jeff's chief characteristics is loyalty. He stands by people. We just pray that he doesn't get dragged back down by some of his old friends. Some are good people, like Old Man Mike, the artist, but others are users (in more ways than one). Please keep Jeff in your prayers. He's a tough guy, but he's also like a child in many ways.

We often go through the chest-high weeds looking for the lost sheep. It's painful when we find the sheep, but then they die. This Sunday we lost an old friend of the apostolate, TT, who was found hung in one of the local nature parks.
TT was a twenty-something young black man who was always thin and typically wore outlandish clothing. The first time I met TT he was wearing American flag spandex shorts and a matching top. He looked like a gay Captain America. At night, TT was a fixture along NE 82nd, selling himself for sexual favors, sometimes dressed as a woman.
TT was always happy to see us. He would recklessly dash across four lanes of night time traffic to greet us, and enjoy our hospitality. He always had time for us, and was almost always cheerful and funny. He had no enemies, except himself, his heroin suppliers and the demons whom hunt us all.
TT was usually wearing one of our rosaries, at least during the day. One evening I noticed he didn't have a rosary and offered him one. He politely but firmly rebuffed me, saying he doesn't wear it while "working". I was appropriately chastened because I knew he was "hooking" right then. TT had preserved some sense of the sacred and the honor owed to God through it all. Bless him for that.
TT's death is a hard loss. He is already missed. Please storm Heaven with your prayers. Thank you. 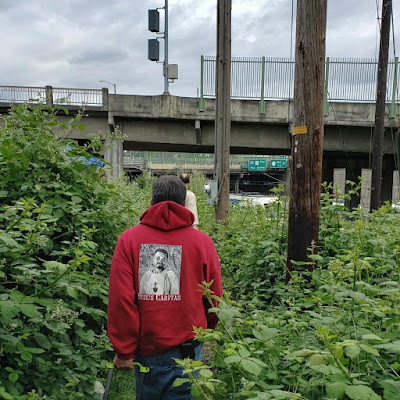