I can think of no better way to say "Merry Christmas" than to share this story of hope and grace.  It's a story of Patrick, a local man, who was once living on the streets up by NE 82nd.  We played a small part in the story, thanks be to God. The first few times we saw Patrick on 82nd he just eyed Chris and I and continued on his bike. Then one day he stopped and declared, "I'm done with the streets. I've had enough." I knew that he meant it, and the next time we saw him I said to Meagan, "He won't be on the streets very long." Little did I know that God would use a medical emergency to get the job done. Please read Patrick's story. I pray that his story will be widely circulated. It will bring hope to many families who have sons and daughters on the streets.


Posted by Scott Woltze at 8:04 PM No comments:

A Collage of Recent Photos 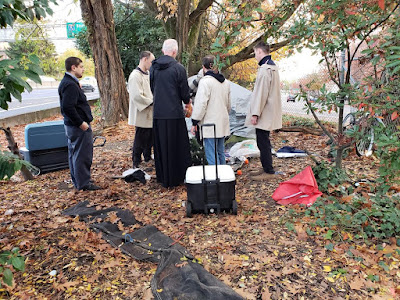 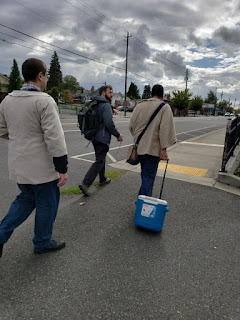 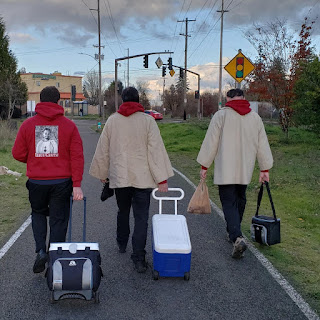 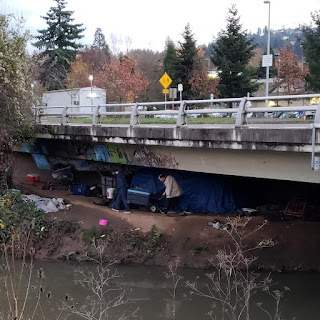 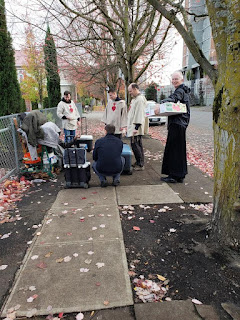 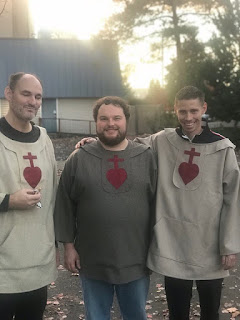 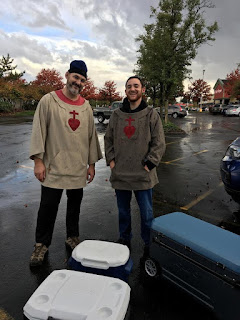 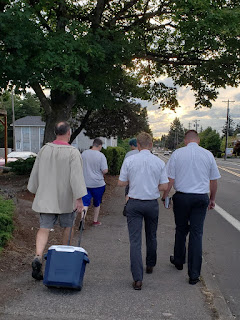 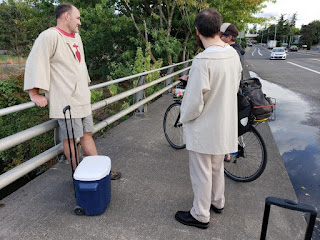 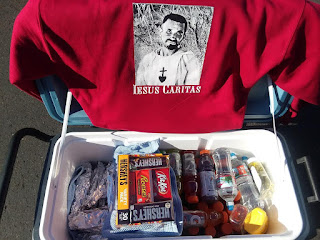 Posted by Scott Woltze at 9:39 PM No comments:

Since the heady days of the great and fun Catholic blogs is basically over, we've reluctantly moved over to Facebook.  I posted this account on Facebook yesterday:

We had a wild and tumultuous weekend on the streets. At one point I turned to Shawn and observed, "We've seen a lot of reality in the last 24 hours." It started Saturday evening, when we walked NE 82nd in honor of the feast day of our spiritual patron, Blessed Charles de Foucauld. Our first "customer" was Thomas "Weedman". He came came running after us full of enthusiasm. He remembered us from months before, and was on hard times. He gratefully accepted wool socks, hand warmers, some food and drink, and asked for a rosary and prayer cards. Then he launched into a spiritual examination of his past, and told us of how he had gone down the wrong path by making his estranged wife his "idol" rather than God. He had clearly been raised a devout Christian, and was now gracing us with his testimony. It was a blessing to meet Thomas.

Next we met Jessica who was juggling a heroin syringe as we loaded her with gifts. She apologized in embarrassment, and we promised to return soon with burgers from Burgervile. We had done a head-count of the homeless as we walked down 82nd, and Jesus always makes sure we buy enough burgers. On our way back to Jessica, we met "Free Bird", a very young woman who is also a heroin addict. She was doing far worse than when I'd seen her months before. Barely coherent, she had no shoes, and was wandering alone around Montavilla Park. She's a wisp of a girl, and she needs friends to keep her safe on the streets. Jessica was more lucid when we returned, and she told us of her trials, including a sexual assault on the streets and missing her children. Yet for all her pain. Jessica was not without hope. She remembered better times and better friends, and told us of her adventures in trying to become a Catholic. She even ventured she might become a religious sister one day. And why not? I wish we had sisters here who helped women like Jessica, and surely some of them could one day become sisters too.

We met other street friends that night, but I'll particularly cherish the long conversations with Shawn and Chris, my brothers in Christ. Men need quality time and conversation with other good men, even when the conversations become heated. We Catholic men are not without our passionate opinions!

The following afternoon we walked SE 82nd distributing hot dogs and other goods. We met many of our regulars, including Johnny, who heaps us with abuse when we won't give him $20 or a motel room. Well, I'd had enough of Johnny, and shouted him down before stomping off. Johnny is the rare addict who won't let any one in--even though we've known him for three years or so. Johnny never has a good word for anyone. Fortunately, Jonathan Gnibus and Nick El-Hajj stayed behind with Johnny even though I shouted for them to follow us. Last I saw, Jonathan was giving Johnny a prolonged hug--something I thought I'd never see. And it turns out, Jonathan finally got Johnny to open up, and explain where all his pain comes from. Not surprisingly, Johnny's anger begins with an evil babysitter doing some awful things to him. Blessed be God for Jonathan and for Johnny in that moment of grace.

The rest of us headed up to SE 92nd to a homeless camp. A new member of our crew, Stephen Tobusch, had shown up just as I shouted down Johnny. He had never walked with us before, and as we headed up to 92nd I apologetically explained that I had never yelled at any one in my five years walking the streets. Well, Stephen was about to witness another first for Urban Missionaries, for we would have to call an ambulance!

Under one of the roads over Johnson Creek, I saw what looked like a very still body under a sleeping bag, or perhaps some gear that was stowed away. In any event, there was no response. So I climbed back out from the little ravine and under the cyclone fence. But my conscience bothered me, and my friends urged me to give it a second look. So I went back down, and this time I gently lifted the sleeping bag. Old man Randy was under there, soaking wet and smeared with vomit. He responded after a minute, and I ran off to get him some warm hot dogs and other goods. His hands were bloated to double their normal size, and he could barely move his body. He was grateful for the hot dogs, though he seemed to have hypothermia. He had been pushed or "rolled" into the creek the previous night, and tried to warm up by hiding in his sleeping bag with the same wet clothes. It wasn't working, and he wouldn't survive another 36 hours in the cold. I called 911 and the paramedics came. It took some time to get Randy up and out, but he gave us a warm smile from the gurney. Sadly, he also accused one of our long time young homeless friends of being the one who pushed him into the creek. Our young friend looked sad and guilty, so it appears to have been true.

At this point Jonathan and Nick finally joined us after spending the last hour with Johnny. We met and talked to many other people, including three young Christians who were also out befriending and helping the homeless. Thanks be to God! At this point we also met Billy, a man in his early 30s who was passionately thankful for our apostolate. Billy lives with his mom, and was passing by on his bike. As we talked, I thought he was starting to break into tears, and all of a sudden he sped-off! I was grateful when he returned ten minutes later, and we resumed our talk. He asked for all the literature we had, and said he wanted to join us at church. But then he began to have tears again, and sped-off. It seemed to me that Billy had once lived on the streets, and was grateful and touched by the love we have for those we meet. Clearly God was pouring out his tenderness on Billy that day. Glory be to God!
Posted by Scott Woltze at 9:28 PM No comments: