When a Drunk Man Told Me All of My Faults

Catholic shrines have a kind of gravitational pull for those in the throes of conversion or a spiritual awakening.  This is true for non-Catholic Christians as well as those without any faith background.  Chris and I have had at least three profound encounters on the outskirts of The Grotto, the National Shrine of Our Lady of Sorrows.  These seekers may not go deep into The Grotto to find Christ in the Eucharist, but they do find us, anyway.

A few weeks back, Chris and I had just left The Grotto parking lot to head down Sandy Boulevard when we spotted a small man sitting on the sidewalk under the shade.  I nudged Chris, "Let's go talk to him."  The man was slightly rocking back and forth, cross-legged, with an open beer can at his knee.  I couldn't tell if he was homeless or not.  His clothes were clean and he was well-groomed, but he was well-past tipsy.  He complimented the Jesus Caritas heart/cross we wear and I settled down beside him on the sidewalk.  I hoped to do him a bit of good, perhaps hear his story, but he had something else in mind.  Perhaps we looked too somber, because he began a spontaneous rhapsody on the beauty of God's creation.  I thought he sounded very Franciscan, and I was edified when he transitioned from  the joy of created beauty to our simple response of thanksgiving.  He began exhorting us--and seemingly all creation--to recognize blessings and always give thanks.  I felt a pang of conscience, and thought, "I don't give thanks enough.  I take so many things for granted, and I miss the beauty and grace in life due to cares and little tasks.  I've gotten into a rut, a bad habit."

The little man continued and then transitioned again, thanking God for the kind hand of His providence.  He marveled that before God even created the world He knew and fore-ordained that we would meet him, David Becker from Chicago, on that day in that exact spot.  He explored this over and over again until he was satisfied that we recognized it as a great wonder and a great kindness.  For God can do all things and with unsurpassing good!

Then I felt another pang of conscience.  "My faith is weak.  I act like the fruits of this ministry only depend upon me, and I'm always focusing on people's obstacles to conversion instead of the power of the Holy Spirit.  If I could just get out of the way, this apostolate would bear more fruit."

Then David transitioned again, from God's goodness to Jesus' sacrifice on the cross.  He had already shed tears during his oration (and he had brought me to tears of gladness), but now he had the gift of tears in abundance.  He began to repeat with his head down, "Jesus took a whuppin' for me and he took a whuppin' for you."  Then he gave me a searching look and pleaded, "Jesus took a whuppin' for us!"  I felt the third string of conscience.  "I'm a lousy Catholic, with so little devotion to the Passion.  I take Christ's sacrifice on the cross for granted.  He gave it to us freely, and I just take it, run with it, and don't look back."

At this point it was clear that the Holy Spirit had given me David's prophetic words as a gift.  I inwardly laughed as I remembered sitting down some twenty minutes before as a humble gesture in the hope of getting David to open up.  But now who was ministering to whom?   When it was time to leave, David profoundly repeated, "I'll see you guys in Heaven." I couldn't help but think he was being prophetic again.  The Spirit goes where it will.

As we walked away, Chris said, "I couldn't hear him or understand him that well."
I replied, "Well, you were sitting further away.  I think it was meant for me, anyway.  That guy just told me all of my spiritual faults--all the holes in my spiritual life."

Thank you, dear Lord, for David Becker, and may we always keep him in our prayers.
Posted by Scott Woltze at 9:37 AM No comments: 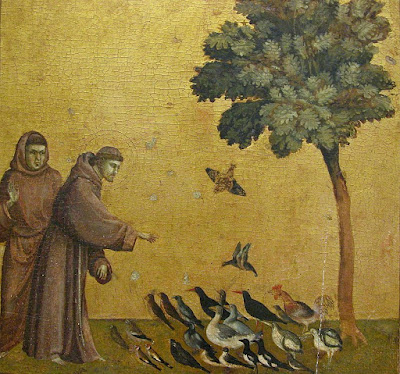 Chris and I have had a remarkable string of Spirit-filled encounters on the streets, including moments of real conversion by those we meet.  I hope to share some of them in the coming weeks.
Posted by Scott Woltze at 9:36 AM 4 comments: