Over the past year, some of the best Catholics I know started to wonder at the apocalyptic prophecies of a Colorado man named Charlie Johnston.  When he came to Portland on a speaking tour, they were in attendance, and my contact in the archdiocese (for the street apostolate) even wrote of his private support in a circulated e-mail.  I opted not to attend (even though I had peeked in on Charlie's blog over the years), and instead watched his archived talk from Birmingham, Alabama.  I came away skeptical, and his home Archdiocese of Denver has recently released a letter "strongly" advising their caution.

While most Catholics simply ignore contemporary private revelations, and others have an understandable aversion to them, there is something afoot when prayerful, servants of Christ are pulled in that direction.  Fr. Mitch Pacwa attended the Birmingham talk, and Patrick Madrid later hosted Charlie Johnston on his radio show.  Neither offered their support, but it is remarkable that each thought it was worthwhile to give him a hearing.  It is clear that many faithful Catholics have begun to fear that the esalating rebellion from God has finally gone too far.  Like the ancient Israelites, they mourn the eclipse of God among their own people.  They fear that national disaster will follow sin (as it inevitably does in our individual lives), and yet they also hope for divine rescue.  Charlie Johnston's prophecies have piqued both their fear and their hope.  He has prophesied global civil wars and economic collapse by 2017, and the disruption of the upcoming electoral cycle.  Then in late 2017, he claims that God will reach down in mercy and rescue his weary people through the Immaculate Heart of Mary.  There will follow a re-unification among Christians, as well as a lengthy period of peace and prosperity.

Charlie's prophecies seem too incredible to be true.  But then again, events like the Russian Revolution, the rise of the obscure Nazi party to near world domination, the mass killings of the Khmer Rouge etc. also defy our good judgment. Just listen to those who lived through those times--such events were unthinkable even a decade before.  While Charlie's political and economic predictions are highly improbable, where he really loses me is in his understanding of the action of God. Our God is meek and humble of heart, and unlike demons, he is reticent in displaying his power.  He favors being born in a stable, dying abandoned on the cross, and most of all, he takes pleasure in working through us.  He delights in seeing his glory manifested through us, especially the most humble, wretched and unknown of his people.  When we need rescuing, he sends us a St. Francis with his army of beggar-saints, or he soothes his wounded heart through the hidden sufferings of young nuns: St. Bernadette Soubirous, St. Therese of  Lisieux, Blessed Elizabeth of the Trinity, Blessed Marie-Celine of the Visitation, St. Faustina, St. Mariam Baouardy and more.  These holy women were near contemporaries of each other.  That's extraordinary!

In our own troubled days, God will send us our own saints.  In recent posts I have pointed to men that have been favored by the Holy Spirit, and some have even advanced along the road to sanctity.  Fr. Jacques Philippe has the wisdom and love of the Holy Spirit, and Cardinal Sarah will have a lengthy, consequential reign as our next pope.  He will bring clarity and unity of purpose even as the world prefers her false gods.  The Church will regain her spiritual strength and vision, birthing new saints and martyrs, amidst "The Long Defeat" (Tolkien's lovely phrase) leading to the Second Coming.  That's my prophecy anyway. It isn't sexy, it doesn't satisfy our outrage or our cry for God's stupendous intervention, but it is the way of the Lord.  Our task now is to simply follow Him in patience, and grow in faith, hope and love.


Posted by Scott Woltze at 9:39 AM No comments:

I heartily recommend a trip to the theater to see the movie Risen.  Many viewers have described it as the best Christian film since The Passion of the Christ.   It may not rise to the level of The Island or Ida but it's certainly the best English language faith film in a decade.  There are many moments in the film where I was impressed by the filmmakers dramatic timing, insights into character, faithfulness to historical detail, but it can't quite sustain this excellence throughout.   Yet it had enough artistic merit  to shake me out of the cold/flu season doldrums.

It's usually best to watch such films alone, and without any distraction.  Just as you go on a retreat to be alone with yourself and your God, so will worthy Christian art benefit from a quiet, open soul.  If you allow the Holy Spirit to work, a good Christian film or story will leave you in a raw heap.  While watching Risen, I was shaken by the pettiness of my own life in contrast to Christ's sacrifice and the dramatic first days of the Church.  I am easily absorbed by minor problems, distracted by sins and imperfections.  It's so easy to lose site of the big picture: namely, Jesus is risen, he has made us his brothers, and we are to "die" for others as he has died for us.

I think we always feel like lousy Christians when we watch Christ walk with his apostles amidst miracles and brotherly love.  We marvel at the revolutionary fervor of the kingdom of heaven made visibly present, and contrast it with our own dullness of spirit.  We often lack the wonder, boldness and great hope of the first disciples or even the early Franciscans, Dominicans and Jesuits.  Some critics of Risen have objected to the giddy joy of the character Barnabas.  But as I can attest, that is the normal response of an encounter with the Living God, of witnessing Christ's triumph over sin.  This ecstatic joy has it's time and place, but it needs to give way to a harder-won joy.

Christ doesn't want us to be strong in the Spirit through miracles or extraordinary graces.  That would be the Spirit on-the-cheap, or easy grace.  The path to the Kingdom of Heaven is an arduous ascent, as depicted in this famous 12th century icon. 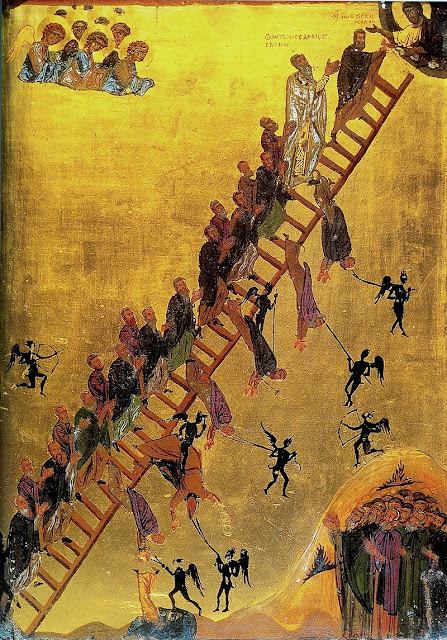 St. Peter Chrysologus reminds us in a sermon from the Office of Readings, that holiness comes from the fruitful union of prayer, fasting and acts of mercy.  He writes, "Prayer knocks at the door, fasting obtains, mercy receives.  Prayer, mercy and fasting: these three are one, and they give life to each other."  That may not sound enticing, but it is the means to a joy that is even more irrepressible.

The other day I saw this joy in the person of Fr. Jacques Philippe.  He is a well-known author and retreat-master who has a hush-hush reputation as a mystic and walking saint.  Fr. Philippe would be horrified at the description, but that's the scuttlebutt.  Some of our local priests, fresh out of seminary, were giddy like Barnabas to host him for a Lenten retreat at a Portland parish, and the nearby Maronite monks knew a blessing when they saw it.  On the second day of the retreat, as I watched his small figure in a brown Carmelite habit, I was utterly convinced that he would be raised to the altars one day. As he spoke, my soul glided along the cadence of his words, but my focus was on his person and his irrepressible laughter.  It was as though St. Peter of Alcantara or St. John Joseph of the Cross stood before us, and in fact, he is united with them in Christ's mystical body.  Fr. Philippe couldn't speak of God without little laughs and smiles, letting us in on his secret even as he spoke in French.  After one of the talks I asked for his blessing for this apostolate, and afterwards he gave me one of those smiles.  A smile of Christ who loves his children, a smile between two Christians who know something the world will never understand.