Hold Fast To The Cross

Whenever someone decides to join us for the first time I try to ease them into it by choosing a quieter walk.  Thus, when Chris, Jeff and I walked together for the first time we decided to walk SE 122nd since it would give us an opportunity for deep prayer.  Or so I had hoped.  Instead, it was an assault on the senses and it took us nearly two hours to complete our rosary in Latin.  I never did slip into a spirit of prayer, and Jeff was a little stunned, and said, "I can't believe this is Portland.  It's like we're in some alternative universe.  There is just so much pain out here."  Jeff was able to digest the madness (including the motorist who stopped and asked us if priests were still raping altar boys), and joined us again last weekend.

Amidst the dysfunction was a transcendent moment of beauty and even holiness.  As we walked by a little field between two multi-story buildings, our friend Andrew emerged running to greet us.  We had met Andrew a few weeks before in the same spot, and I was relieved that the police had not rousted him from his little hide-away.  I immediately noticed there was something child-like in the way he ran and welcomed us.  Then as he stood before us I couldn't take my eyes off the rosary he wore around his neck.  I had given him the sturdy, full-size rosary the last time we met, complete with large wooden beads and a thick plastic crucifix.  Here is a photo of the rosary. 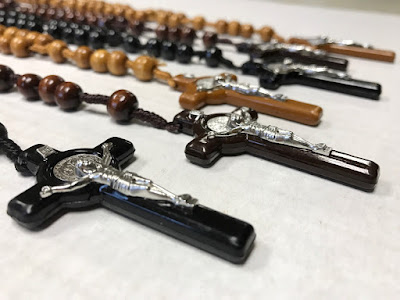 Only now the crucifix had changed.  The cross had become worn down in the shape of a hand.  I stared at the crucifix struggling for understanding.  Andrew had gripped the cross with such constancy over the last few weeks that he had worn the color off the plastic!  I gathered my thoughts as he showed us some novelty currency he was given: old bills of Ho Chi Minh and other Asian despots.  Then I asked, "Andrew, you're Korean, right?"  He happily nodded.  "And Catholic?"  He smiled and nodded again.  Then I asked if he ever thought about going to mass at the nearby Korean parish.  He gave a gentle shrug with a hint of embarrassment.  I didn't press the issue.  As we took our leave, I left with a sense of awe and even shame.  Andrew leaned heavily on our Lord, holding fast to the cross amidst homelessness and a touch of mental illness.

I have never gripped the crucifix in such a way, and Andrew's dedication blew us all away.  God has often chosen his prophets and saints from men like Andrew.  I joked to Jeff and Chris that I better stay right with the Lord, or God will give Andrew words for me the next time we meet.  I couldn't bear the thought of that correction.  Poor Jesus!

I'm sorry that Andrew is either too embarrassed or uncomfortable to attend mass, but the truth is that the parish needs him more than he needs them.  I pray that he'll find a home at the nearby Church of the Korean Martyrs.  In the meantime, I'm going to have Meagan give him one of the large crucifixes she gets free from this apostolate in Naples, Florida.  Bless the men from Families for Christ for making and giving away these strong, wooden crucifixes.

In the second part of this post, I'll relate the story of Melvin, a homeless man we met on the same walk who could rhapsodize and quote scripture like a revivalist preacher.

In the meantime, enjoy the collage that Jeff made: