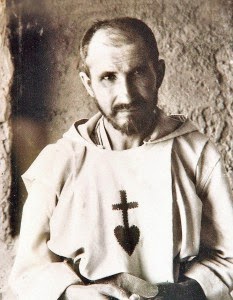 To be continued...
Posted by Scott Woltze at 2:38 PM No comments:

How the Apostolate Began, Part I

After All Saints' Day Mass of last year I took our daughter to visit the art gallery where my wife works.    We saw the new exhibit for November, played on the stairs, and then headed out the front door for home.  As I left the gallery I noticed a husband and wife with their twenty-something son and daughter waiting for a table at a restaurant.  As soon as I saw them, I also understood something much deeper than their generally pleasing appearance.  By a divine grace I could read the general state of their souls, and the whole family lived in the friendship of Christ.  I stared at them and they were gracious enough to smile at me.  I thought, "They must be devout Christians."  Then a young man briskly passed in front of me reading something on his iphone.  My thoughts were interrupted.  There was a shadow over this young man, as well as a hardness and determination.  He had turned his back on God, and was not receptive to grace.  I watched him as he continued down the sidewalk.  I thought, "That used to be me."  Then I noticed a brunette woman in her mid-30s who wore a scarlet and gray skirt suit.  She was crossing the sidewalk in the usual way, but I understood she was in turmoil.  Whatever had gratified her in the past had fallen away, and she was now bare, confused and ripe for grace.  All she needed was the right person to introduce her to Jesus.  I knew I wasn't the right person to do that--at least, not yet.

When I got back to the car I mechanically fastened my daughter into her car seat and wondered what God was up to. Why did God show me those people and the state of their relationship with him?  Was he showing me a need, and inviting me to do something about it?   That must be it!  But what?  I don't even know them, or the millions of others like them.  How could I be of use to them unless I took the faith to the streets?  I pondered the possibilities on the drive home and was grateful when my daughter fell asleep.  That would give me more time to think and reflect on what had happened.  As I reached 50th and Powell I noticed a young Mormon missionary that I had spoken to a few months back. He was gesturing enthusiastically to a shabbily dressed man while his fellow missionary looked on.  I was surprised that their mission territory extended this far out.  Then it hit me.  This might be a sign.  I asked, "God, do you want me to be a street missionary like the Mormons?  That must be it!"  Then I drove another twenty blocks and was astonished to see a young black preacher camped out on the corner only two blocks from my house. He had never been there before.  A young white man stood next to him holding a large ugly sign--the kind of street sign that mattress stores use when "everything must go".  I read the sign: "Repent or perish...Now's the time..." followed by some scripture.  The preacher looked angry and the young man looked defiant.


They wouldn't win any converts with that approach, but at least they were trying to witness.  After all, where were the Catholics--those graced with the faith that Jesus passed down to his disciples?  My heart sank for our dear Lord.  His only representatives were a pair of fundamentalists and some eager but confused Mormons.  It couldn't be a coincidence that I had seen these street missionaries on this afternoon.  God has a perfect plan, and every piece moves in harmonious purpose with every other piece.  God had arranged for me to be in the exact place and time to see three different states of soul, and two different examples of street ministry, and in just twenty-five minutes!

When I got home I grabbed a fresh yellow legal pad and sat down.  Words and ideas streamed from my mind with remarkable clarity and conviction.  It was effortless.  I thought, "This must be the Holy Spirit..."  Then I remembered Blessed Charles de Foucauld and something that had happened two years before.