Join us here on Facebook to follow our adventures and get updates and events.  I'll be posting several times a week on our comings and goings, as well as sharing photos and other good stuff.  I'll continue to post longer reflections on this blog.

Walking With The Church

In the past ten days we've been blessed to take part in a parish rosary walk and the Corpus Christi procession led by Archbishop Sample.  In each case, we brought up the rear with our rolling coolers, and periodically broke off to minister to those on the streets.  In each case, we eventually fell far behind as we sat with those whom God had put in our path.

The parish rosary walk was a four-hour trek along the boundaries of St. Stephen's parish.  There were around 60 participants of all ages, including Chris, Shawn, Jonathan, Meagan and myself.  Fr. Andersen asked me to surreptitiously plant St. Benedict medals at the four corners of the parish boundaries, and we were able to do so.  The parish neighborhood has dramatically gentrified, and it was a mild shock given our usual walking routes.  In fact, Portland is beginning to resemble the Bay Area in it's idolatry of "good living" (at least in the gentrified neighborhoods). The clean streets with countless new quirky and cool shops (I counted three gourmet ice cream stores) is a far cry from the more visceral lives of those we typically befriend.  And yet, our friends on the streets lead more "real" lives by daily confronting their own hunger, thirst and battle with demons.  For all that, most are not without hope and faith, and they are keenly aware of their lowliness before the good God.  That's not a bad place to be, even though most people count them as simply wretched.


Suffering is God's "ace card" in bringing us to him.  Through different forms of suffering, Jesus stripped me of my idolatry towards women, physical fitness and the life of the mind.  In suffering, many of us discover and acknowledge that "the wages of sin is death", and then we become converted to life in Jesus Christ.  Jeffrey James, a homeless alcoholic whom we met on the rosary walk, has arrived at this place.  He knows he is an alcoholic.  He has no delusions.  He takes pride in his landscaping background, and likes to plant flowers and clean the grounds where he stays.  He was raised Catholic at nearby St. Ignatius Parish, and was overjoyed at the rosary we gave him.  He was touched by our selfless acts, and kept calling us "saints".  Other than his overly generous compliments, he was very lucid.  That often comes from being homeless, because those who live on the streets have a lot of "down time" to take stock of their lives.

We also met two other men who have lots of time to consider who they are and what the world is all about.  Nico and Alan chased us down in their motorized wheelchairs.  They each have disabilities, and it is very difficult for Alan to speak. They are young men who spend long hours in hospitals and clinics and they use the time to take stock of things.  Unfortunately, their zeal for justice has brought them to Marxism, though their concern for the poor and vulnerable is sincere.  Chris and I talked to Nico and Alan for 45 minutes, sharing our reasons for conversion, and discussing the dislocations caused by capitalist market economies.  By the time our conversation had run it's course, we were hopelessly behind our group and had to hustle to make the parish barbecue.

The Corpus Christi procession began at the Cathedral and travelled down to the NW park blocks.  The crowd was impressive, numbering in the hundreds.  There were many priests, religious sisters and seminarians, and lay folk from many different countries.  It was a display of authentic Catholic piety, beauty and diversity. 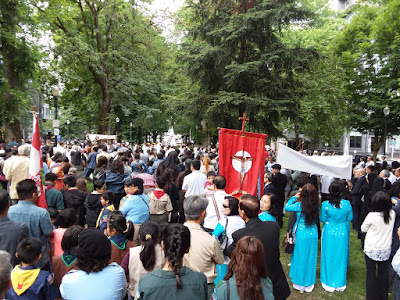 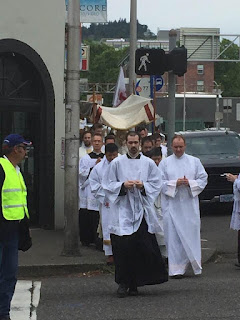 Once again, we eventually fell far behind the main group, but we had many remarkable conversations and encounters.  I believe it was because Jesus Christ in the Eucharist prepared the the way before us.  We gave away four coolers worth of Gatorade, water, protein bars, socks, gloves and rosaries.  I would especially ask our readers to pray for two men.  The first, Michael, is a homeless addict in his early 50s.  His heart aches for God's mercy and divine life, but he doubts that God will forgive him for his squandered life.  Meagan and I sat with him and talked with him for some time.  Chris led a prayer over Michael as we all joined hands.  It was clear that Jesus had placed Michael in our path, and that our sweet Lord was calling him, heart speaking to heart.  He cried quiet tears even though he wasn't the type to cry.  I was gratified when we were able to greet Michael again on our way back to the Cathedral.  The other person I beg prayers for is Scotty.  Scotty was living in a doorway by the Cathedral.  He is a frail man in his early 50s who dresses like a woman.  He wears black stockings and brightly colored jewelry, but is badly unkempt.  Someone recently beat the tar out of him.  He reminded me of the Gospel story of the man beaten by robbers (that is, demons).  Christ is the Good Samaritan (according to the ancient Church Fathers) who takes pity on our woeful condition and restores us to health.  It tore my heart to see Scotty beaten and broken (physically and spiritually), and I wept when I got home.  Jesus has a radical solidarity with the beaten and broken.  Please pray for Scotty and Michael.