Here are some of our "best-of" stories from our Facebook page.  We usually post there twice a week. 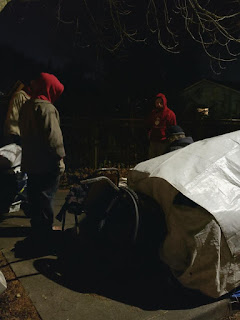 Advent is the darkest time of the year, only to bring forth Jesus, the light of the world. We toil, often in the dark, but Jesus transforms our toil into something unspeakably beautiful. Shawn Natola described this in an e-mail he sent me from the road:
"The Lord has called you and all of my dear friends out of complacency to bold action for His "little ones". How many times were our hearts broken open walking the streets, listening to tales of suffering. The Lord has used us to inject hope into a world that is (humanly speaking) totally desolate. You showed me countless times what it means to abandon oneself into the arms of our Heavenly Father to take what we receive from the streets and place it into the chalice of salvation at every mass. I cannot recall all of the times that I have served at the altar and as Fr. Andersen or Fr. Boyle would place those few drops of water into the chalice I would name those we met on the streets or the Urban Missionaries themselves. And it is interesting how those few drops of water (our tears, hopes, joys, sorrows and sufferings) are completely lost in the Ocean of mercy which is the wine soon to be the Precious Blood." 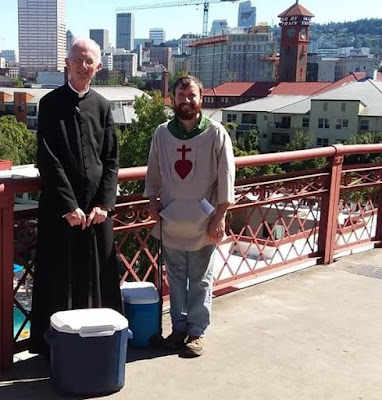 This week we said our goodbyes to one of our “founding” members. Shawn Natola (pictured w/ Fr. Boyle) is driving across America as you read this, heading back home to South Boston to care for his mother.
Shawn first began to walk with us about three years ago. In that time, we’ve seen just about everything on the streets—the good, the bad and the ugly. Shawn’s first few walks were especially ugly, as though the Devil was determined to drive him from the apostolate.

On his first walk we encountered Cindi, the hardest of hard cases who had a knack for sweet-talk, thievery, lying and brawling. Cindi could instantly transform from a charming, feminine woman to a boiling, inferno of rage in a matter of moments. One night along SE 82nd, we encountered Cindi and had our usual conversation. As we talked, we watched as she tried to unhook a tarp she had tried to secret over a fence. Upon saying goodbye, Shawn gave her one of his trademark affable smiles. Cindi somehow interpreted this as an insult, and came storming back hurling curse words and threatening to punch him out. We tried to calm Cindi as Shawn stood pale with shock. Shawn is a gentleman if anyone is, and he was unaccustomed to the, ahem, social graces of the likes of Cindi. Eventually we calmed Cindi down (sort of) and moved on. A short time later we ran into some old street friends who asked us if we had seen Cindi, for she just stole their tarp and other items!

A few months later we were walking SE 82nd again (we are fools for punishment), and again Shawn was tempted to abandon walking the streets. This was the first time we met Rachel, who eventually became one of our favorites, and whom we would especially pray for and seek out. At the time, Rachel was a feisty eighteen year-old from a very broken home, and was just developing a heroin addiction. She looked upon us with skepticism as we tried to win her over. Then a seventy-year old man with a skeletal look, driving a brand new SUV pulled up and she got in his car in the parking lot behind us. The skeletal man would pay her seventy dollars for what transpired in the few minutes she was in the car. In those few minutes, Shawn seethed with righteous anger, but I explained we had to take it, just as Jesus chose to take it on the cross. I told him we were in it for the long haul for Rachel, and if we intervened we would be persona non grata on 82nd, and Rachel would just find a new customer after we left. In fact, we have been a constant in Rachel’s life, and she is very fond of us in her sassy way. She also gave up prostitution a long time ago.

Shawn might be an Urban Missionary for life. He’s going to walk the streets of South Boston just as he has here. He is hoping to rope in some laymen from a good parish run by Capuchins, and perhaps the occasional Capuchin as well. In the few years I've known Shawn, I've watched him grow in holiness and consequently become a leader, and a man who attracts other people to him. That's what happens when you become healed-in-Christ. You become "a man fully alive" (as St. Ireneaus put it), and you are given the holy strength to bring God's patience, love and healing to others.

An exclusive look inside the kitchen of Urban Missionaries :-)  We made a chicken and vegetable soup, with a healthy serving of Serrano Ham (thank you Spain!). 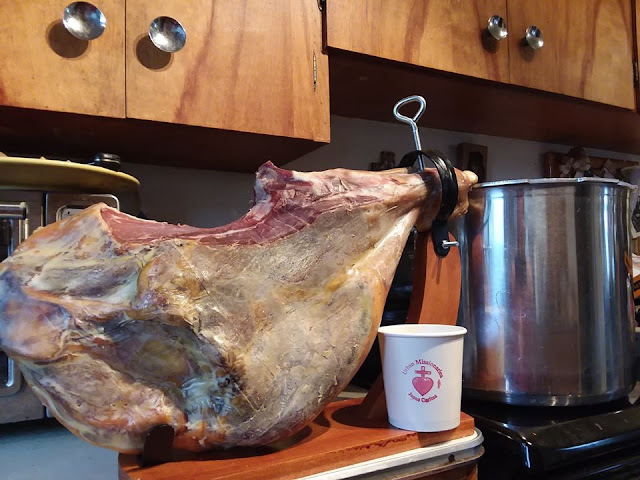 
Last weekend we found some shivering homeless campers on a trail above I-205. They had run out of wood, and were too tired and disoriented to find more. So Jonathan and I set about scavenging for wood. It was slim pickings until I found a dead fir tree about the size of a Christmas tree. It took a little work to uproot it, but we got the jog done. it was a joyous moment to drag the tree back to the camp. We love to serve Jesus, and everyone He came down to redeem. Glory be to God! 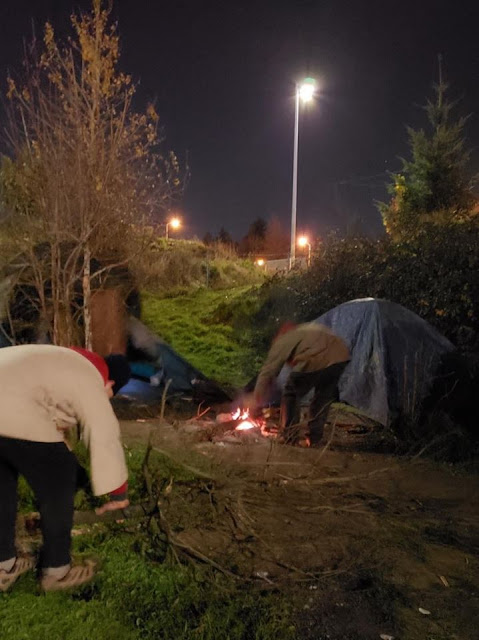 Posted by Scott Woltze at 12:28 PM No comments: