Thoughts on the Men's Conference

The Salem Men's Conference exceeded expectations and had a massive turn-out despite the threat of icy roads.  I was impressed by how many young men were there--men in their 20s and 30s--and the average age of the participants was a full 10-15 years younger than past conferences I've attended.  The men were also more masculine and rugged (and that's a good thing!) than you find in the urban centers, and they represent the future of the Church in the fading West.  These men are blessed with a masculine bishop, Archbishop Sample, who actually stayed for the conference after offering the morning mass.  As the well-traveled Fr. Donald Calloway MIC remarked to a few of us, "Most bishops just take off after giving their remarks.  You've got a rare one here."  Amen!  Archbishop Sample takes great pleasure in being around faithful, orthodox men; he is at home with us, and we are at home with him.  May God give the Church many more shepherds like him!

The most remarkable thing about the conference was how many fascinating men were in attendance.  Since Chris, Felix and I had our "Street Evangelization" table, I was able to sit back and meet and listen to the stories of many good Catholic men.  It also helped that our table was right next to Fr. Calloway who always invites a long line of greeters and book-buyers.  I met a burly, Hispanic retired police officer (a friend of Jesse Romero) who shared his tales of evangelization while on duty. He was a remarkable man, intrepid and creative in sharing the faith, and with a heart fashioned by Christ.  I met Richard, a Vietnam vet whose experiences in the war led him to be a street evangelist and a protestant pastor.  He entered the Church a couple years ago, and would make a great addition to our "team" if he ever drives up here from Cottage Grove.  I had a faith-filled chat with this fascinating young man, who renewed his marriage and life after re-discovering the faith "once-delivered".  Finally, I met a widely-read gentleman who had a special devotion to our patron, Blessed Charles de Foucauld.  In fact, as I queued up to communion, I noticed the man kneeling in prayer, and a gentle burst of divine love came from my chest, where my relic of Blessed Charles rested.  Blessed Charles has a pure, heavenly love for the man, interceding for him before the good God.  If only we knew how great and busy the saints are on our behalf!  We develop an idle interest in a saint, feel a little kinship, and meanwhile the saint burns with heavenly love on our behalf.  It boggles the mind!

Chris and I were operating on very little sleep at the conference, and Chris admitted that he would probably sleep through half the talks.  But that was before Fr. Calloway, Jesse Romero and Deacon Sivers got going.  Then Chris was held in rapt attention, and I kept teasing him, "You're not asleep yet?"  No one sleeps during those talks.  We hope to attend next year's conference, slated for October.

Posted by Scott Woltze at 9:57 AM No comments:

Chris and I are heading down to Salem in ten days to attend a Catholic Men's Conference.  The event has drawn an outstanding line-up of speakers, and we've been given a table to spread the word about street evangelization.  I'm very grateful to the organizer, James Thurman, for the opportunity since display space was limited.  We'll have a large banner with the Jesus Caritas cross, our brochures, the prayer cards we give away, and one of our tunics (our "uniform").  I can't wait!  I feel like a little boy waiting for Christmas.  I'm certain that we'll meet scores of faithful Catholic men of integrity who are hungry to deepen their relationship with Christ.  I look forward to hearing their stories and watching their faces as they share the faith.  One or two might even join us.

Who might join us?  The Holy Spirit has prepared them by giving them a nagging itch to do "something more" for the faith, for those in the fog of unbelief, and for those on the cusp of conversion.  The apostolate is for someone who sees a prostitute or homeless man and thinks, "I want to talk to them, to get to know them, and help them if I can."  In fact, you will find the bloom of grace in unexpected places!  This apostolate is for you if you've figured out that what really matters is the Kingdom of Heaven; if you crave the knowledge and delight of Jesus and a galaxy of angels and saints over the judgment of men.  This apostolate is for you if you've discovered that the Faith is for the intrepid, and that there is no greater adventure than following Christ where he leads.  In fact, he will lead you to a greater understanding of yourself, seeing yourself in His clear and humble light.  He will lead you to other good men, united in fraternity in the faith, and may he lead you forward with us! 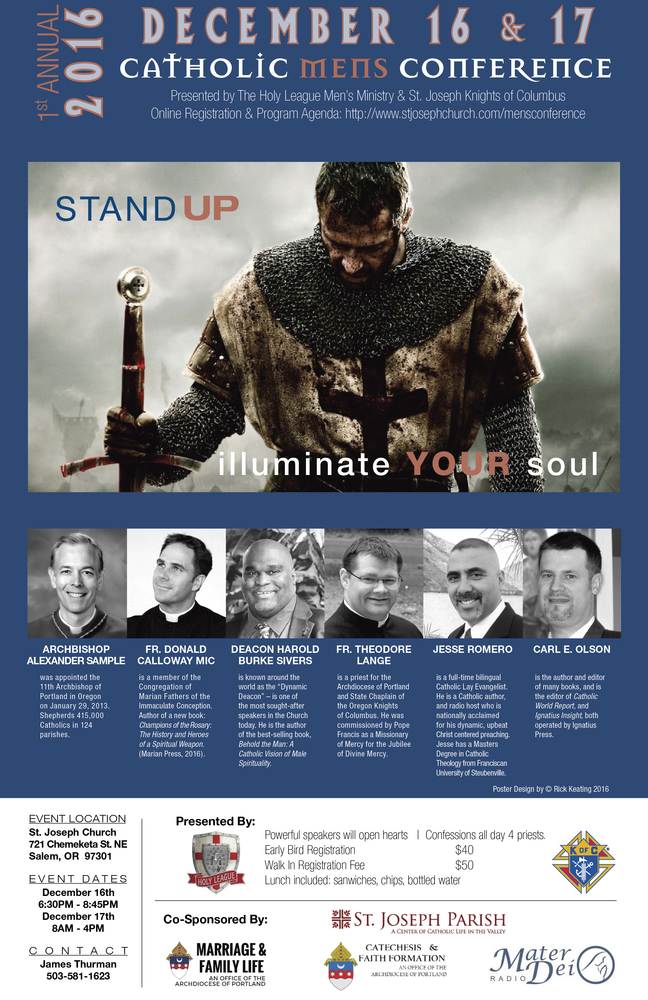 An excellent video calling men back to their awesome responsibility and dignity in the Church Militant:


Posted by Scott Woltze at 9:41 AM No comments:

Those Who Keep The World Turning, Part II

God chose those whom the world considers absurd to shame the wise; he singled out the weak of this world to shame the strong.  He chose the world's lowborn and despised, those who count for nothing, to reduce to nothing those who were something; so that mankind can do no boasting before God.


The Catholic Herald has a must-read article about a remarkable homeless man, Thomas Hooker, who just passed on to meet his sweet Lord.  His pastor, Fr. Illo, described Thomas as "a kind of patron saint of the homeless".  Thomas spent many hours praying each morning in the back of Star of the Sea church, much like another saint of the homeless, St. Benedict Joseph Labre.  Thomas was well-known to locals for his kind disposition and cheerful words.  He lived for years under a tarp on the streets of San Francisco, which for the uninitiated carries a damp coldness in otherwise sunny California.  The stubborn chill was undoubtedly quite a change from Thomas's native Caribbean island of Trinidad. Thomas acknowledged his trials, but knew that they made him a better man: "I suffer a lot, you know, and when you suffer, you must know to be kind."  One aspect of his kindness was generosity.  Like St. Benedict Joseph Labre, he gave away an extra donut or an extra dollar when he had them.  This may have been impractical, but he had a mystic's vision of things.  Once he "woke to a cloud of butterflies kissing him."  Some call that crazy, but I'd call it a foretaste of Heaven.


I wonder how many graces Thomas brought down for those who knew and observed him?  How many people he introduced to Christ in his own lowly person, Christ-in-disguise?  How many souls he saved from perdition by his supplications and patient sufferings?

I'm grateful that God sent Thomas to poor Fr. Illo, embattled and despised by all the right enemies. It has been a rough couple years for Fr. Illo, who has sought to found an oratory after St. Phillip Neri's example, at Star of the Sea parish.  May God send the oratory many more saints-in-the-making!

While St. Philip Neri is a co-patron of this apostolate, our primary heavenly intercessor (not named 'Mary') is Blessed Charles de Foucauld. Today is his feast day.  After more than a year of searching, I finally obtained a relic of Blessed Charles.  It is from the burial cloth in which he was wrapped from 1916-1929.  To my delight, it was issued by the bishop where Blessed Charles was a priest, and the bishop belongs to the "White Fathers", from the religious order that Blessed Charles worked alongside of.  Deo Gratias!  I now wear the relic around my neck when we walk the streets to evangelize.  Blessed Charles, ora pro nobis! 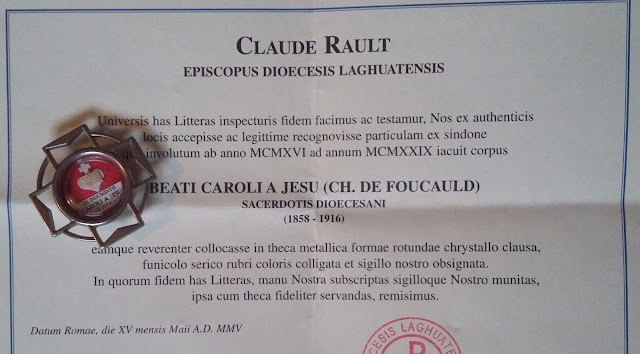 Posted by Scott Woltze at 10:43 AM No comments: