"Where Two Or More Are Gathered In My Name"

I was blessed last week by a visit from my friend Josh, who does the apostolate in Louisville, Kentucky.  He's a good man, a loving father and husband, and loves the faith "once handed-down" by the apostles, saints and martyrs.  He has the soul of a philosopher, an "eros for knowledge" (as Plato put it) of the true faith.  That's a grace that we wish more embraced in these rocky times.


On our walk we chatted with some of the "little souls", the working poor and those who at one time or another have been down-and-out.  Many of them are easy to love because they are not puffed up.  Even when they have pretensions, they readily let go of them when they meet an honest soul.  It's easy to see why our Lord favored them, the "poor in spirit".  It's harder to love the proud, those who think they've got it all figured out--when in reality they are a product of the zeitgeist and deceptions that come from sin (both demonic and personal).  It's especially hard to love those who have ascended to positions of authority--especially religious authority--and are either hirelings or wolves.  If I had more love, I would pray and sacrifice for them.  But alas, my middle name is 'Nickolas' after St. Nicholas, and my first urge is to punch the heretics among us.  Ha ha!

With that in mind, I'm sad to report that the new cardinal-archbishop of Brussels has effectively shut down the Fraternity of the Holy Apostles.  You can read all about it here.  I've written of the Fraternity on this blog many times, and they are a model for the renewal of the Church.  The recently retired Archbishop of Brussels, Andre-Joseph Leonard, was even planning on spending his last years living amongst the fraternity.  No word on whether he'll have to move out.  While Archbishop Leonard was known for his courage and patient suffering as his country "descended to Jericho" (as the early Fathers liked to put it), his successor never misses an opportunity to push "new thinking" on all matters sexual and "ecumenical".  While I'm sure the Fraternity is reeling right now, they should know that their persecution is the surest sign of God's love and confidence. Christ suffers for his Church, and he has now brought the Fraternity close to his aggrieved heart to share in his passion. In time, all things will be restored, if only they are faithful.  Pax Christi.

Posted by Scott Woltze at 9:00 AM No comments:

The Sacred Fountains of Inspiration (II)


My dear Mother unexpectedly passed away from heart failure on May 26th.  She was only 66, and enjoyed racing around the house and sidewalks after her grandchildren.  Many thanks for all of the prayers; we have been lifted up by grace and Christian love.  We always welcome more prayers for my mother, Pamela, and her large family.  The other day at holy mass, I understood that she was joined in the maternity of Mary, in union with her, mothering the people of God here below. To those who knew her, it is not surprising, though it was a welcome theological insight.

I was delighted to read about the two young Dominican friars who are walking from New Orleans to Memphis on an evangelical pilgrimage.  Imagine walking 500 miles through the American South in the stifling summer heat!  It's a very Catholic thing to do, and an exemplar of the kind of risk-taking and holy zeal  that will re-build the Church for our times. The friars will offer what the Church sorely needs: their sufferings and prayers united with Christ, fellowship, a visible presence on the street, and serene evangelization.

You can read all about the friars at:   https://friarsonfoot.wordpress.com 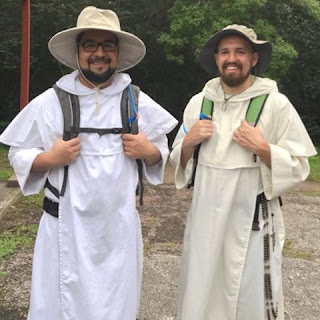