Apologies to my regular readers for my extended absence.  I've had to focus all of my time and energy on keeping my domestic church happy.  In the meantime, I'd like to direct your attention to a conversion story that is currently making the rounds: Drunks and Monks by John Carmichael. 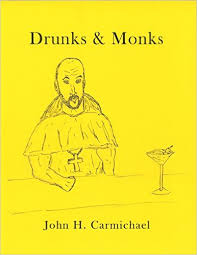 As the book commences, the author seems to have done well for himself.  He's young, has a million dollar home off the ocean in Southern California, and represents media celebrities at an entertainment law firm.  He married an attractive woman--his college sweet heart--and other people envy and idealize their marriage.  But it's all tenuous since it's not grounded on Christ.  In fact, the last time he attended mass was at his own wedding some years before.  His life finally begins to crumble when his wife asks for a separation.  He abruptly quits his job and takes his first drink at thirty-four.  He had sworn off alcohol at an early age after enduring his mother's alcoholism, but now liquor strikes him like a revelation. He takes to booze like a greedy new convert.

He endures much suffering and family strife, but God continues to lure him forward.  Finally, through an amusing act of providence he gets lost and discovers a Buddhist Monastery.  But the path is blocked by an enormous bull that has escaped from a local ranch and so he continues down the road until he reaches a Norbertine Abbey.  After some fits and starts, a new man emerges, the new creation in Christ.  At the end of the book he writes to his father, "The Catholic Faith truly must be the Pearl of Great Price, because it cost me everything I had to get it."

I'm always gratified by a good conversion story.  Such stories offer grace made visible, the living faith moving in lines across a page.  Please check it out.  The book resounds with the Holy Spirit, and is so much more worthy than what we typically read.