Holiness and Evangelization Proceed Along the Same Path: Part I

This last Friday was the Feast of the Sacred Heart of Jesus.  Since I wear the image of the Sacred Heart on my tunic, I was keen to walk the streets in order to receive the graces of this great feast.  I was not disappointed.  Our Lord had something special in store--the re-appearance of a woman whom I had often commended to His Sacred Heart.

It began four years ago when I started to have an itch to do some kind of evangelistic outreach--particularly to the most wounded persons on the streets.  This desire arose because I would often drive past a mobile home park on SE 82nd and see the same intoxicated prostitute weaving about, waiting for a "john".  Unlike most prostitutes (even "street walkers") she never attempted to fix herself up.  Her light brown afro would stick out in haphazard clumps, and she usually wore dirty pajamas.  Then one day I noticed she had a distended abdomen.  Was she dying or maybe pregnant? As the weeks and months passed, her belly grew and it was clear that she was with child.  I tried to think of a way to speak with her and create a rapport.  I didn't want to just walk up to her alone, as she and the police might assume that I was a john.  Perhaps I could park around the corner, put my little girl in a stroller and we could pass her way for some conversation.  But before I could put the plan into action she disappeared.  That was over two years ago.  I assumed she was either dead or in jail.

Then I finally saw her last Friday while walking the streets.  We had a cordial conversation, but it was  limited by the fact that she had a mental disability.  I was grateful to see her alive and well, even if she was out there waiting for "clients". After we parted, all I could do was offer her to Jesus in prayer, whose Sacred Heart is wounded and burning with love for all of his little ones.  I trust I will see her again soon. 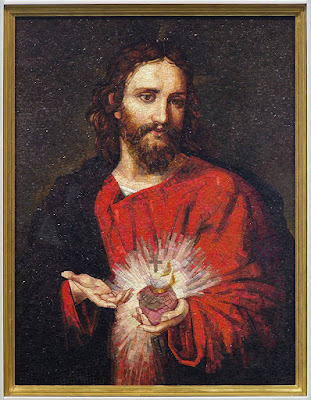 We Are Not In Charge Here


It's worth reflecting on this simple episode because it reveals a foundational truth about the Christian life and evangelization.  Only God could have so arranged for me to see the woman on this special feast day.  Just as only God could have arranged my meeting with the archdiocese on the Feast Day of Blessed Charles de Foucauld, and all of the other providential encounters I have had while walking the streets.  None of the encounters were by chance (there is no such thing as 'chance' when it comes to the work of salvation), and they certainly didn't come from my hand.  I have no power to put the right person in my path at just the right moment.  All I can do is cooperate with grace, and try to strip away those habits within me that pose barriers to reflecting Christ.  The power and wisdom are with God, and our role is to recognize this truth and set out upon the path of humility.  John the Baptist's maxim is our way to both holiness and evangelization: "He must increase, and I must decrease."

Unfortunately the way we often approach and talk about evangelization seem to point along another path.  Recently a bishop on the East Coast announced his program for re-evangelizing his once-Catholic city.  He offered his flock the same stock phrases and concepts that we have heard so many times in recent decades: a "permanent strategic planning commission", a "comprehensive pastoral planning process", "new leadership councils", etc.  Notice that these phrases assume the same strategies and governing institutions that we find in corporate America, NGOs and in political bureaucracies and governments.  These phrases are in wide currency because they give us what we crave most: control, or at least the illusion of control, and the satisfaction that we are "doing something".  Unfortunately, while this approach often works in the economic and political realm (after all, the economic and technological developments of the last few centuries are unprecedented), they've born little fruit for the kingdom of heaven.  Why?  Because our power is not in our cleverness or finding new "efficiencies", but in the providential grace of God. In fact, you'll read in the lives of the saints how a saint planned and drew out the details for some hoped for religious community or great work for God, and yet the saint was glorified in some completely different way.  That's why Mother Theresa used to say, "If you want God to laugh, tell Him your plans."  The Saints still became saints and had a profound influence on leading souls to Christ, but it was not by their own path.  It was in following the will of God--which was usually unforeseen and often didn't suit them (at least at the purely human level).

Posted by Scott Woltze at 8:42 PM No comments: