Every Catholic Would Evangelize...

...if they knew the unfathomable love that God has for each poor sinner.

Yesterday Jeff and I walked what is supposedly enemy territory.  For the first time we evangelized the hipster/alternative neighborhoods of Division and Hawthorne.  People intentionally move to the neighborhood so that they can be as far away as possible from whitebread Mormon families or evangelicals asking, "Are you saved?"  There is every kind of ethnic or vegan restaurant and food cart available, hipster barber shops, high-end coffee and even a witchcraft store. There are also the usual "Black Lives Matter" signs along with the post-election sign, "In Our America..." 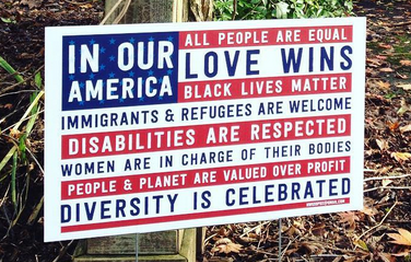 These signs sprouted up right after the election as a kind of self-righteous protest.  I toyed with the idea of slightly tweaking the sign so as to make a Catholic version since many of the statements can be read in a Christian sense.  It would start out, "LOVE WINS BECAUSE JESUS WON".  In any event, many progressives are yearning for the beauty and goodness of God and His creation, but they are currently in thrall to distortions of His Kingdom.  Sometimes the distortion is cruel or crass enough to reveal the face of the demonic.  Thus, amidst the airy celebration of diversity and "love" and equality is the cruel fact of abortion, like a giant brick smashing their lovely pretenses.  Or the crass fact that the signs are made by a group called, "Nasty Women Get Sh*t Done".  No thank you, count me out!  I prefer the Blessed Virgin Mary, Little Therese and the Little Arab.

Despite all of these obstacles, Jeff and I had a number of significant conversations deep behind enemy lines.  This surprised me, but it shouldn't have.  The enemy lines are artificial, a construct along culture war lines, and a lie perpetuated by the Devil.  Satan has artificially drawn the lines of his kingdom versus God's Kingdom, and many of us fall for the trap.  I am guilty of this, often saying or thinking, "It's impossible to evangelize these neighborhoods.  People move there to get away from religion."  But there's no getting away from God in this life.  He is the Hound of Heaven and He goes where He wills.  Moreover, the hipster and alternative types don't know they are behind "enemy lines" because they are blind to the spiritual combat we are all born into.

Jeff and I had a wide range of encounters.  We were hailed by a patron of a French bistro, had our photo taken with a friendly man outside a bar, and spoke to the usual addicts and homeless.  Our most in-depth encounter was with Sarah and her husband on the sidewalk patio of a bar.  Sarah was covered in tattoos and wore tights decorated with skulls.  Her head was shaved on the sides and back, and was long and dyed green on top.  She looked every bit Irish, and she confirmed she was of Irish descent. Nevertheless, she had been raised without religion and described herself as an agnostic.  She wanted to know why I was no longer an agnostic.  How had I come to faith?  I gave her a short version of my conversion, emphasized that people do have supernatural experiences, and maybe she will have one too.  Her husband became drawn into the conversation.  We bounced around different topics, but things were cut short when an unfriendly waitress asked us to leave.  The waitress's t-shirt had the word "TESTICLES" written prominently across the back.  The enemy certainly thought this was his territory, and he kept sabotaging our conversations that day.

When I got home I thought of Sarah as I hand-washed the dishes.  While I scrubbed, God twice made me feel the unfathomable love he has for Sarah.  The first time I wept in shame.  It is so easy for me to just give up on people who look like Sarah, and think, "Well, they made their choice.  Hopefully she''ll convert when she's old."  After almost four years of walking the streets I have so little hope and charity.  When will I ever learn?  Why don't we see them and love them as Jesus sees them?  Why don't we really trust in his grace, knowing with holy hope that He can do all things?  If we even had the faith of a mustard seed, so many would come to Jesus through us.  Instead we judge by appearances and live our little narrow lives.  I think I've finally learned my lesson.  We will evangelize ALL of Portland.
Posted by Scott Woltze at 10:10 AM