Two Paths To Hell: Part I, Path I

In the last few weeks we've met two men who have had credible, supernatural warnings about traveling the wide road to eternal damnation.  The first man, David, was a computer programmer and lover of all things "tech", until God disrupted his life two years ago with a series of supernatural visions.  The second man, Mike Owen, was an electrician and ex-military man (dishonorably discharged) who was warned of his current path to damnation in the midst of an ugly divorce. That was five or six years ago, and his life has deteriorated since, with homelessness, addiction and perpetual womanizing.

I met David at Union Station while I was propped up against a brick wall praying over a female addict who had plunged all the way into demonic oppression or even possession.  The woman's noises and contortions were animalistic and lewd. She spoke no language.  She was so scabbed and natty that it appeared that she'd been living in the woods for the past ten years.  David watched us for a while, and then approached just as the woman calmed down.  I was gratified by his intelligent and sensitive face.  He appeared to be in his late twenties.  He asked about the Sacred Heart symbol we wear, and wanted to know what I as all about.  I gave him the joyous five minute version of my story from high school drop-out and convict, to secular academic and then to earnest follower of Jesus.  He asked why I was Catholic, and I reached back into my academic background, and explained that the history of ideas and institutions show that the Catholic church was the early church from the time of Christ.  David said he was raised Catholic and over the next 45 minutes he shared his faith journey with us (Jeff and Chris eventually joined in).

Some years before David had begun the journey to Christ, but he had become wrecked on the shores of revisionist Biblical "scholarship".  These scholars disputed the Word handed down to us, and replaced the Word Incarnate with a tamer Jesus more suited to the vices and errors of the age.  This form of "scholarship" was a characteristic fruit of the "Enlightenment" with its rationalist assault on traditional claims of authority under the pretext of "reason".  Liberal protestantism is the most common form of this error, though it also infected the Church over a century ago with Modernism, and then demonically erupted fifty years ago under the guise of "the Spirit of Vatican II".

Before his conversion, David was a perfect pupil of the Enlightenment.  He immersed himself in the latest technological innovations, and he gloried in the incredibly diverse (and error strewn) world of ideas and debate that was opened up with the eclipse of Christendom.  He spent hours upon hours before his computer screens: programming, reading techie sites and devouring message boards.  But God wanted David for His own, and intervened with a series of supernatural interventions.  These experiences gave David a glimpse of the glory and truth of the three persons of the Holy Trinity. They also included witnessing demons, and an angel denouncing the lies of theological liberalism (including revisionist Biblical scholarship).  In one experience, David watched in awe as God forcibly withdrew a demon from David's computer screen.  For a moment, David was face to face with the wicked spirit that he had been serving through countless hours online. Then God cast the formidable demon away, back into the abyss.  The demon will remain there until some other poor sucker invites the creature in to be the master of his life.

In another supernatural experience, David was on an escalator with a crowd of his peers.  They all had smart phones, were enthralled with the gadgets of modern life, and though polite and tolerant, everyone was essentially ensconced in his own life.  In a word, everyone was alienated: separated from God, separated from each other, and separated from the person whom God made them to be.  While David had the impression that the crowd on the escalator was ascending, he realized at the last moment that they had actually been descending, and that the elevator ended like a cliff--dumping the passengers into the torments of Hell.  David was about to plunge over the edge as the others had down before him when the vision mercifully ended. 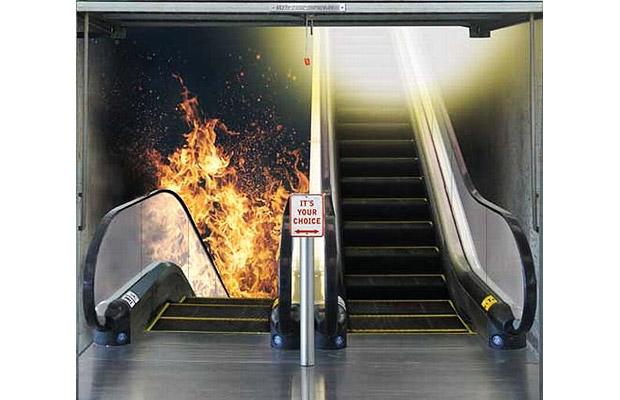 After David finished his conversion story, I told him that God had rescued him not just for his own sake, but so that he might witness to others.  God would one day give him a mission or an apostolate, because countless young people are on the wide escalator down to Hell.  It is becoming the norm for young people to live in a cocoon of narcissism and self-gratification, and yet they are self-righteous and believe things are trending up.  In God's mercy, many will be saved, but He desires to save them through faithful Christians like us.  I invited David to join us and put on a tunic if that was God's plan for him (though David is currently an evangelical).  We gave him our brochure and our prayer card, and I urged him to stay in touch.  I doubt that he will contact us because he has sworn off smartphones and computers.  He is still fresh from his conversion experience, and as God continues to strengthen him, we pray that he will reach out and send us an e-mail. Maybe God will even give David an internet apostolate one day.  God is funny like that.

It just so happens that the National Catholic Register has just published a piece on the perils of the "iPhone culture" that complements David's vision.  Go read Jason Craig's article here.
Posted by Scott Woltze at 9:27 AM