I received an e-mail from Felix Barba of St. Paul Street Evangelization introducing me to a woman, Meagan Montanari, who was interested in joining us.  My initial thought was, "Uh oh, we are a group for men.  A way for men to walk in Christ's footsteps and form the kind of guy-friendships that are so needed in today's Church."  Then I read a little bit about Meagan, and the confirmations from the Holy Spirit began to flash across my mind.  You see, In the last month I've taken a great interest in the opioid epidemic sweeping the country, even praying regularly for a local school teacher, Brynne, who made national headlines by getting busted at her elementary school with heroin and meth.  I know Brynne's mother, a very kind and successful restauranteur.  Even loving parents have to endure the hell of a child with addiction.  Which brings us back to Meagan.

Meagan had attentive, loving parents though she was largely raised without any faith.  For most children that's enough to get them going in life (at least for a time).  But not for Meagan.  As far back as she can remember, she was always saddled with a sense of incompleteness and malaise.  It quickly turned to despair, and at the age of thirteen she began cutting herself and fixating on suicide.  Meagan was especially made to need God as the locus of her identity, and without Him she became unmoored from her self.  In high school she gravitated toward the "bad kids", the kids who reacted against their own alienation by engaging in drugs, alcohol, casual sex and petty crime.  Meagan continued to slide further and further, trying everything to escape from her pain, even trying the occult.  She "graduated" to more serious drugs, and notched some jail time and probation for minor felonies.  She moved frequently, thinking she'd be happier with a new change of scene, but her pain always moved with her.  Sometimes she was homeless, sometimes she could hardly believe the things she had done.  She says of that time, "I truly was like the walking dead."

Meanwhile her mother began to pray for her, having turned to God as the only hope for her child.  God would answer her prayers, perhaps because her mother had stepped out in faith while enduring a troubled pregnancy.  The doctor had urged her to abort tiny Meagan, but she refused.  But Meagan's mother began to despair of prayer, and she was ready to give up just as everyone else had done.  Then one day while driving, her mother experienced an intense blinding light, and an angel appeared next to her saying, "Don't worry about Meagan, Meagan is going to be okay."  Then the angel intoned, "Pentecost, Pentecost, Pentecost" and disappeared.  She called Meagan in a heap of tears and hysteria, repeating "It's all real.  Jesus, angels, Heaven...it's all REAL!"  Meagan was given the grace to immediately believe her mother's vision.  Perhaps she believed because she had once witnessed a crowd of demons surrounding her in a seedy motel.  That had been a glimpse into Hell, but now Heaven!  Meagan and her mother eagerly investigated the word 'Pentecost'--what did that strange word mean?

Meagan sought baptism in a protestant church and began reading the Bible. While her life was calmer on the surface, she was still addicted to drugs and fell into promiscuity.  Pentecost hadn't come to completion yet, something was missing in the faith she had found.  She signed up for a methadone program to get a safe, legal high and had two children amidst the dreary march of daily methadone fixes.  This went on for five years, until she gave in to a craving for the real thing: intravenous heroin.    She began shooting heroin and was soon homeless on the streets of San Francisco.  She became pregnant a third time.  Her first child, a son, was adopted, and her second child, a daughter, lived with her parents.  This couldn't continue!  She sought help at a protestant church and they directed her to a home for pregnant women run by St. Mother Theresa's sisters.  She was accepted into the Queen of Peace Shelter, and regularly joined the sisters in the daily Chaplet of Divine Mercy.  She gradually became intrigued by the sisters' joy and peace.  It was clear they actually knew Jesus by the way they talked about Him.  They had the real thing, and Meagan wanted it.  She went through RCIA and was received into the Church on Easter Vigil 2015.

Meagan began to take daily communion and witnessed in delight as all of her old chains fell away.  Jesus mixed with her body and blood through the eucharist, and she no longer desired drugs or sexual attachments.  She even threw away her cigarettes and anti-depressants, and started eating healthy for the first time in a decade.  Jesus in the eucharist was what she had been yearning for ever since she was a child, and she no longer had to wonder why there was a hole in her heart.

Today Meagan continues to go to daily mass, often with her children.  I can attest that Meagan's a woman of uncommon strength, like her favorite would-be saint, Mother Angelica.  To know Meagan is to witness the immense healing power of Jesus, the Son of God.  It is to know that miracles do happen.  She now offers healing to others on the streets and at the abortion clinics.  She's good at it because she has the courage and credibility to speak from the heart.  She's currently working on a psychology degree, and hopes to one day start a Catholic women's shelter.  Uphold her in your prayers. Though while strong, God will perfect Meagan in her weakness.  That is our path to union with the Son. 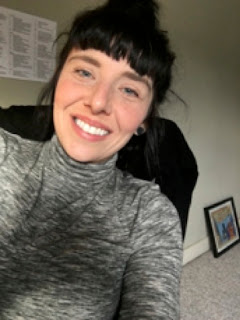 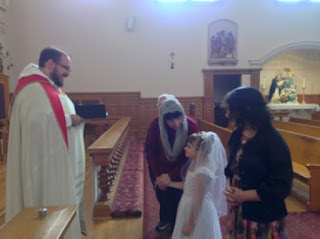