All It Takes to Win Heaven

One of the hidden gems of the catholic internet is the website, https://contemplativeinthemud.wordpress.com.
The author is a youngish westerner teaching in Thailand.  Every day he posts a short spiritual reflection  by a saint or other trusted spiritual writer.  He recently found this outstanding quote from Blessed Charles de Foucauld: 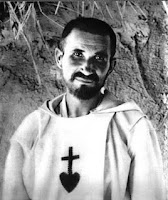 "[God] didn't attach salvation to knowledge or intelligence or wealth, nor to long experience or rare gifts that are not given to all.   He attached it to something within the reach of everyone, absolutely everyone.   Jesus attaches salvation to humility, to the act of making yourself little.   That is all it takes to win heaven."


After his conversion, Blessed Charles always sought the lowest place.  Whether as an anonymous brother in a Trappist Abbey or as a day laborer in the Holy Land.  In this he followed the example of many saints from noble or wealthy families (Sts. Francis and Clare, Ignatius and too many others to list).  Pride, privilege and luxury die hard.  But just as he found a home in his lowliness, God desired to raise him up and glorify him.  He reluctantly began studying for the priesthood and was ordained.

He discovered another aspect of humility: that humility isn't just simplicity and a love of being unknown or overlooked, but it is also accepting the path that the Lord has set for you.  Many saints found it painful that God had fore-ordained that they stand out as remarkable, or even obvious vessels of the Holy Spirit.  St. Philip Neri was so embarassed by his reputation for sanctity that he would play the buffoon, walking around Rome with his face shaven on only one side.  At holy mass, he was vexed by the divine love bursting from his heart, threatening to break out in mystical flight, so he would interrupt mass to brush his teeth or offer a silly joke.  Poor Blessed Charles is now numbered among the eminent and celebrities.  Recently a letter of his was offered up for auction, alongside letters from Einstein, Picasso, Beethoven and a slew of papers from presidents and famous generals.  The letter sold for $1,300 (commission included).  The priest who was the original recipient of the letter had kept it as a keepsake and wrote a note on the bottom:

"An encouraging letter--and from such a saint!"

Alas, the hardest humility: accepting that God will not give you the lowliness you crave.  Fortunately, I don't think any of us will have to pass that test!

In the spirit of outing priests as holy, listen to my favorite sermon on St. Paul of the Cross, the founder of the Passionists. The priest is Fr. James Gordon FSSP.  He has a remarkable understanding of the spiritual life for a younger man, clearly a gift of the Holy Spirit.  Two of his brothers also belong to the Priestly Fraternity of St. Peter (FSSP).  Contemplative in the Mud has lately been featuring some mind-blowing observations from St. Paul of the Cross.  Here is a favorite:
https://contemplativeinthemud.wordpress.com/2016/03/21/keep-the-same-way/